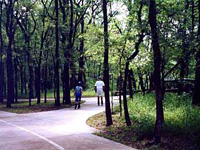 The North Central Texas Council of Governments is involved in various planning projects across the region.  Select a project to learn about recent active transportation planning efforts.

At this time, all plans are completed.