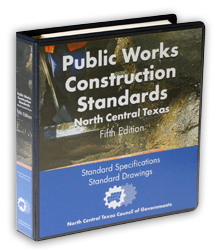 Governments exist to protect the health, safety and welfare of its citizens. Whether it be providing roads for safe and efficient mobility, utilities for clean drinking water and removal of waste, parks for recreation, or storm water management for protection from flooding, public works is the backbone of that existence. Management of public works facilities is a very important component of the responsibilities of cities, counties, and special districts across North Central Texas. The quality of the region’s infrastructure (its roads, water distribution, wastewater collection, and storm drainage systems) has always been a high priority and a source of pride for its communities.

The Public Works Construction Standards North Central Texas is a copyrighted document and may not be photocopied, printed or otherwise reproduced, in whole or in part without the prior written approval of NCTCOG's Director of Environment & Development.

As local municipalities adopt the Construction Standards, NCTCOG will keep record of local amendments and make them available on this page so there is a central resource for contractors working in the North Texas region.

Questions or Comments regarding the 5th Edition Construction Standards?

As an ongoing commitment to the region and the improvement of the Standards document, we are accepting comments and suggestions for review. The Construction Standards Subcommittee of the Regional Public Works Council will review the suggestions to each Division and amendments to the Standards will be released over time.