With a rapidly growing population, the Dallas/Fort Worth Metroplex is the nation's largest inland metropolitan area. To assure an adequate long-term drinking water supply, each of the major branches in the upper watershed has been impounded with manmade reservoirs. Thus the Trinity River as it flows through the urban core faces great extremes, with low flows composed almost totally of treated wastewater to massive floods with the potential for billions of dollars in damages and untold loss of life across its 240 square mile floodplain.

The cooperative regional effort to manage the Trinity River Corridor began in the early 1980's when USACE began working on a Regional Environmental Impact Statement (Regional EIS) to address the cumulative impacts of individual permitting decisions. A working group of staff from the affected local governments and NCTCOG provided input. The draft of the Regional EIS first compared the cumulative impacts of two opposite philosophical approaches for utilizing the river corridor—maximum environmental quality versus maximum development—and found that maximum development would result in flood flows that would overtop existing levees in Dallas and Irving. Given the seriousness of these preliminary findings, a special Strategy Committee of elected local government officials was formed to assist in the development of the Regional EIS.

As expected, local involvement in USACE's preparation of the final Regional EIS was much more intense, with many meetings and several new development scenarios crafted between the two extremes. The final Regional EIS found that these more moderate development scenarios would not only result in the Dallas Floodway levees still being overtopped with catastrophic results, but that properties in upstream cities would also sustain considerable flood damages. Thus no city could assure adequate flood protection for itself by itself—only a common approach could be successful.

Although no proof was required, Mother Nature stepped in anyway. Major floods occurred in May/June 1989 in the Upper Trinity River. Over a dozen lives were lost as a result of the floods within the Metroplex and hundreds of millions of dollars of damages were sustained.

In 1989 NCTCOG adopted a Regional Policy Position on Trinity River Corridor that affirmed, among other key points, that local governments must be the stewards of the Trinity River Corridor because individual goals can only be achieved through cooperative management and a comprehensive approach addressing flood damage reduction, recreation, and environmental quality must be pursued.
Upon request of the affected local governments, Congress authorized the USACE to undertake a Reconnaissance Study to determine if a feasible flood protection plan(s) could be identified to reduce the risk of flooding, as well as address water quality, recreation, environmental enhancements, and other allied purposes. The USACE studied a variety of flood control options and found at least a dozen with positive benefit-cost ratios that merited further attention in the Feasibility Study phase.
It was now time for local governments to act. In 1990, each of the nine cities (Arlington, Carrollton, Coppell, Dallas, Farmers Branch, Fort Worth, Grand Prairie, Irving, and Lewisville), three counties (Dallas, Denton, and Tarrant), and two special districts (Tarrant Regional Water District and Trinity River Authority) with development and regulatory authority for the Trinity River Corridor executed inter-local agreements with NCTCOG to establish a formal structure for cooperative planning. A Steering Committee of elected officials was formally appointed to provide policy guidance, along with a staff task force for technical support.

NCTCOG, on behalf of the local governments, was identified as the administrative agent to enter into a cost-sharing agreement with the USACE for the Upper Trinity River Feasibility Study. Even at this stage it was recognized that a more comprehensive COMMON VISION was needed and would be pursued not only with the Corps but other local, state, and federal partners.

In 1990, the first phase of the Upper Trinity River Feasibility Study began as an $8 million six-year effort, with NCTCOG responsible for providing the $4 million non-federal match. In turn, NCTCOG negotiated and administered a $2 million grant from the Texas Water Development Board and obtained the $2 million of local funds on a pro-rata annual formula based on the jurisdiction's land area within the corridor. NCTCOG's funding support came from a portion of the local share.

The purpose of the Upper Trinity River Feasibility Study was to seek potentially feasible alternatives for implementation by the participating local governments to address flood damage reduction, water quality, environmental enhancement, recreation, and other related needs throughout the Trinity River Corridor.

The Phase I Information Paper released in early 1995 identified potential projects with a preliminary positive benefit-cost ratio. The paper concluded that seven of the 14 structural flood control measures were economically viable, and a total of 11 water quality improvement and 20 environmental enhancement measures warranted further study. In addition, 38 recreational development measures were also found to be feasible, as well as cooperative approaches to watershed management. In all, more than 100 projects were identified that could justify federal cost-share participation.

Between 1996 and 2003, projects totaling more than $12 million had been implemented. For a project to be initiated the local entity with jurisdiction must determine its interest and willingness to share in the cost of the project.

The initial projects include:

Arlington Johnson Creek Buyouts: The project includes the demolition of 140 structures, mostly homes, that have experienced repeated flooding along Johnson Creek. As of spring 2003, most have been demolished and native habitat restoration had begun.

Dallas Floodway/Elm Fork Project: As part of the larger city efforts, several floodway initiatives were investigated by the USACE, including: raising the existing levees, lake development, channel meandering, modification of a bridge, and recreation facilities.

Lake Worth Project: Fort Worth sought solutions to water quality and sedimentation problems in Lake Worth.

Corridor Development Certificate Process: The studies called for stricter regulation of development within the corridor to stabilize the flood risks. After several years of detailed discussions, an innovative Corridor Development Certificate (CDC) process emerged in the early 1990's. Local governments still issue the development permit under the National Flood Insurance Program, but common requirements have been added (and adopted by each city in its floodplain ordinance). The CDC process includes USACE review of every CDC request for its flood impact and gives other participating local governments along the corridor 30 days to review and comment upon the development request. While the individual city still makes the final call, it is well understood that a bad decision will land it in court with other cities.

Texas Water Development Board has been a very important cost-share partner. The TWDB provided almost half of the local cost-share, in the amount of $1.875 million, for the first phase of the Upper Trinity River Feasibility Study through 1996. In July 2000, the TWDB approved $375,000 for half of the non-federal cost-share participation in the Big Fossil Creek Watershed Study, which is an implementation project in the second phase of the feasibility study.

Texas Commission on Environmental Quality is the regulatory agency for local storm water discharge and other water-quality related permits and has provided opportunities for local stakeholder involvement in its many activities.

The Federal Emergency Management Agency has conducted weeklong certification training for local governments in cooperation with NCTCOG. These are unique sessions away from their headquarters; as a result, Texas is leads the nation in Certified Floodplain Managers.

The North Central Texas Council of Governments (NCTCOG) has compiled the following report on the May-June 2015 floods as not only an informational piece but as part of an ongoing effort to lessen impacts of floods on our region.

The spring 2015 floods in Texas are often referred to as the Memorial Day Floods. However, weather events in late winter and early spring of 2015 saturated the soil and set the stage for record flooding when several weather systems followed in May and June, delivering a devastating blow to much of Texas. Area lakes and the Trinity River system were overwhelmed with excess water, causing record and near record flooding. These events prompted the President of the United States to issue a major disaster declaration May 29. The Federal Emergency Management Agency (FEMA) later identified an incident period of May 4, 2015, to June 22, 2015. 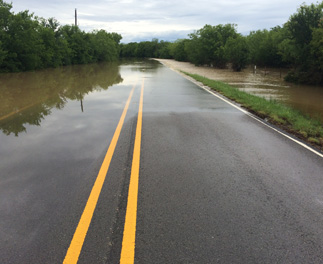 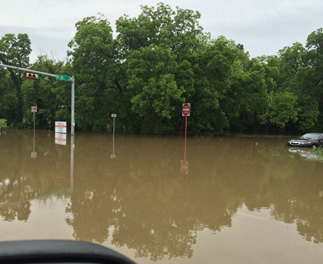