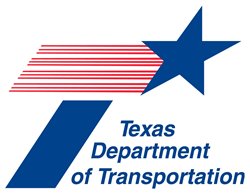 The Texas Transportation Commission has announced a new task force to focus on reducing traffic fatalities on roadways. The task force is made up of representatives from the Texas Department of Transportation and the State’s metropolitan planning organizations, which includes the North Central Texas Council of Governments. In 2019, the Commission directed TxDOT to work toward a goal of reducing the number of deaths on Texas roadways by 50% by 2035 and to zero by 2050. In Dallas-Fort Worth, safety is a key part of the transportation planning process, and the Regional Transportation Council has a policy statement that "just one death on the transportation system is unacceptable."

The task force will have an initial two-year term and will develop a short-term plan to immediately invest in current safety initiatives.

In addition, a long-term plan will be created to identify funding sources, establish metrics to measure effectiveness and describe incentives for the partnership based on the reduction of deaths on Texas roadways.  — By TxDOT

Art contest winner recognized by Cleburne ISD Board of Trustees

The Cleburne Independent School District Board of Trustees honored Angie Andersen, the winner of the 2021 NCTCOG transportation art contest, during its monthly board meeting in October. Angie’s depiction of the “Transportation for All” theme appeared on the cover of this year’s Progress North Texas, NCTCOG’s annual transportation state of the region.

The Cleburne High School student’s creation features a city block with a movie theater and other businesses. Different elements of transportation — a sports car, bicycle, skateboard and bus stop — are included in the drawing. Angie was joined at the recognition ceremony by her art teacher, Raigan Swaim. The art contest was created 10 years ago as a way for NCTCOG to reach younger North Texans, who will be the next generation of decision-makers.

The competition is rotated around the region each year, with the chair of the Regional Transportation Council selecting the participating district. Johnson County Judge Roger Harmon, who served a year as RTC chair through June 2021, chose Cleburne. For 2022, Dallas County Commissioner Theresa Daniel, the current RTC chair, has selected Dallas ISD.

Progress North Texas is mailed to transportation partners, public officials and residents of the region and is also available online. To request FREE copies of the 2021 report or to read it online, click here.

With commutes getting darker, look out for walkers, bicyclists 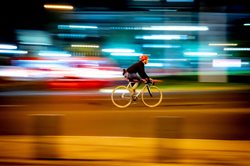 With Day Light Saving Time ending, Look Out Texans is reminding drivers to use their lights in the evening and watch for people walking and biking. The risk of traffic crashes and fatalities increases when the sun sets, with nearly two-thirds of all pedestrian crashes and 80% of all fatal pedestrian crashes occurring after dark. People walking and biking are more vulnerable than those who are in cars and trucks, so motorists are reminded to turn their lights on, look out for people walking and biking, and to avoid distractions while driving. State law requires bikes to have a front white light and a red reflector or red light on the back. Walkers or bicyclists can help make the roads safer by wearing bright and/or reflective clothing in the dark.

The Look Out Texans campaign efforts enhance the work of local, State, and federal transportation partners focused on improving reliability and safety for all road users through roadway design solutions and greater awareness of how people can bike, walk and drive safely. For more information, visit www.lookouttexans.org.

open houses to update the public on the project’s progress. The study is examining potential routes and high-speed technologies between Dallas, Arlington and Fort Worth. NCTCOG welcomed residents throughout North Texas to learn more about the study during open houses in Arlington, Dallas, Fort Worth and Grand Prairie.

Planners originally identified 43 possible alignments between Dallas, Arlington and Fort Worth. The project team is moving forward with an alignment running along Interstate Highway 30 and two technologies: high-speed rail and hyperloop.

The 36-month study is now entering the second phase, which includes preliminary engineering of the alignment and environmental analyses conducted within the federal environmental approval process, or the National Environmental Policy Act review process. NEPA ensures agencies consider the environmental consequences of their proposed actions and inform the public about their decision-making. Once the environmental approval is given, the next phases of the project (securing funding, detailed design, right-of-way acquisition and construction) can begin. For more, visit www.nctcog.org/dfw-hstcs

The Regional Transportation Council approved up to $910,000 in additional funding for Trinity Metro in October for the continuation of a shuttle providing Trinity Railway Express riders direct access to the Dallas Fort Worth International Airport.

The funding will be provided over three years, starting with using up to $290,000 in existing Regional Toll Revenue funds previously authorized by the RTC for transit projects for the first year.

Subsequent operations will be funded with up to $620,000 in Surface Transportation Block Grant funds made available through the COVID-19 Infrastructure Program.  The shuttle service operates as a partnership among DFW Airport, Dallas Area Rapid Transit and Trinity Metro. Due to budget constraints and pandemic ridership impacts, the partners requested additional operational support through the end of Fiscal Year 2024.

In 2018, DFW Airport was operating the service and notified NCTCOG of its intent to discontinue shuttle service between the airport and the TRE Centerport Station once Trinity Metro’s TEXRail commuter rail service was fully operational. It has continued to operate due to coordination among transit partners to identify alternatives and ensure this first-last mile connection would be maintained. In December 2018, the RTC approved Trinity Metro to assume responsibility for continued operations of the shuttle service. TEXRail opened for revenue service in January 2019.

Voters approved a ballot measure November 2 that could bring more transportation funding to North Texas. Proposition 2 is a constitutional amendment authorizing a county to finance the development or redevelopment of infrastructure in unproductive, underdeveloped or blighted areas in the county. The county would form a transportation reinvestment zone and be permitted to use additional tax revenue generated from a new development to repay bonds for non-tolled transportation projects in the zone.

For many years, Texas has allowed cities and towns to form similar reinvestment zones to fund infrastructure associated with certain development projects, using increased tax revenue to repay project bonds. With the approval of this ballot initiative, counties may now do the same. Proposition 2, which passed with 63% of the vote,  was one of eight amendments approved on election day. 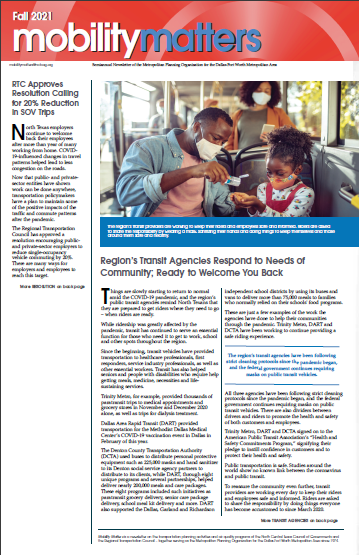 The fall issue of Mobility Matters 2021 features a look at how the region’s transit agencies are prepared to welcome riders back, amid the continuing COVID-19 pandemic.

Ridership has been greatly affected, but providers are working to make sure they keep their employees and customers healthy. Read about the efforts at www.nctcog.org/mobilitymatters.

This issue of NCTCOG’s semiannual newsletter also features a profile on RTC chair Theresa Daniel. NCTCOG Director of Transportation Michael Morris shares a message about the important roles women played in the delivery of the Margaret McDermott bridge, the signature structure designed by renowned architect Santiago Calatrava. NCTCOG’s recent partnership with NASA is also highlighted,  NCTCOG is one of five selected government entities to have signed agreements with NASA’s aeronautical innovators.

Drone workshop: Future of the skies 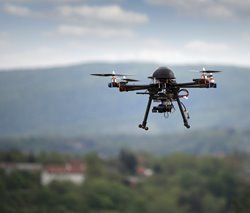 The next Know Before You Fly Your Drone workshop is scheduled for 10 a.m. Saturday, November 6 and will cover the future of unmanned aircraft, also known as drones.

The FREE virtual session will kick off with the topic of the month, "The Future of the Skies," with guest speakers discussing what they expect the future of unmanned aircraft to look like. If you miss this session, a recording will be available at www.northtexasuas.com.

Virtual workshops are scheduled on the first Saturday of each month through 2022 to educate and inform professional and recreational pilots on safe operations to drones. The UAS Safety and Integration Task Force helps mitigate reckless UAS operations and promote the safe integration of the technology into the DFW regional airspace.