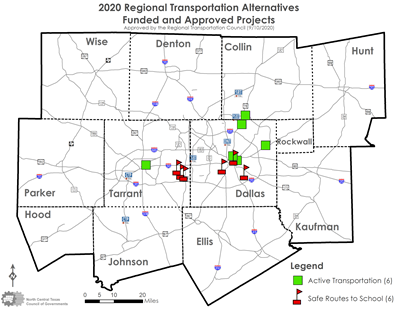 In all, 12 projects spanning six communities in Collin, Dallas and Tarrant counties received a total of $27 million through the Transportation Alternatives Call for Projects, with the addition of $3.5 million in local funding.

Approximately $16.5 million in federal funding was awarded for the construction of regionally significant projects consisting of trails and separated on-street bikeways in Dallas, Fort Worth, Garland, Plano, and Richardson.

The projects will implement significant sections of the Regional Veloweb network, providing commuting access to transit and major destinations. The funded projects will also improve safety at major highway or roadway crossings and

An additional $7 million in federal Transportation Alternatives program funding was approved for six Safe Routes to School projects that will improve the safety of children walking and bicycling to and from school in Arlington and Dallas.

In encouraging more students to walk and ride their bicycles to school through a mixture of improvements to infrastructure near campuses, the Safe Routes to School projects are expected to lead to the lessening of local traffic congestion and improved air quality by reducing the number of vehicle trips necessary to transport children to and from school.

A full list of projects and the funding awarded is available here.

The North Central Texas Council of Governments has been awarded a $25 million grant from the federal government for a project intended to improve commuter rail efficiency in the region. The North Texas Multimodal Operations, Velocity, Efficiency and Safety Program, also known as North Texas MOVES, calls for double tracking of approximately 3.6 miles of the Trinity Railway Express corridor and technology improvements that will help the efficiency of passenger and freight rail in the region.

The following improvements will be made to the TRE commuter rail corridor as part of the project:

• Implementing Clear Path technology to exchange information on train movement in the region. This system will increase capacity of the region’s rail network by facilitating inter-carrier operations and enhancing the flow of passenger and freight trains.

The $55 million North Texas MOVES projects were awarded the maximum amount for a single application through the Better Utilizing Investments to Leverage Development (BUILD) Discretionary Grant Program in September. The remainder of the cost of each improvement will be paid for through a combination of public and private funding.

NCTCOG staff is partnering with HDR Engineering to conduct two 12-month transit studies in the Dallas-Fort Worth region. The Collin County Transit study is focused on assessing transit needs throughout the county and will address local and regional connections, funding availability, near-term implementation and private-sector involvement.

The project team, composed of city, county and transit agency staff, is reviewing existing transit providers and services offered in the county. Next steps include mapping transit areas where public transportation services are viable and scenario and strategy development.

Additionally, staff is conducting a passenger rail study from Irving to Frisco, with a possible extension into downtown Celina. This study is being undertaken in conjunction with the Collin County Transit Study and will focus on analysis of land adjacent to potential stations and ridership estimates for regional rail technology in the corridor.

More information on both studies can be viewed at the following project website: www.nctcog.org/trans/plan/transit/transit-planning/collin-county-study-area.

Electric vehicles continue to grow in popularity across North Texas. There were more than 13,000 on the region’s roads in January, up from around 200 in 2011. There could soon be more places around Dallas-Fort Worth to charge these vehicles.

The Texas Volkswagen Environmental Mitigation Program is now accepting applications for the purchase and installation of Level 2 charging equipment for light-duty zero emission vehicles in Texas.

Public- and private-sector employers and individuals are eligible for reimbursement of up to $2,500 toward the cost of these EV chargers and related equipment.

Up to $10.4 million is available across Texas toward the installation of chargers in a public place, workplace or multi-unit dwelling that does not have existing EV chargers or wishes to expand the number of vehicles that can be charged.

The grants will pay up to 70% of the cost of chargers available to the public and as much as 60% of those installed at a workplace or multi-unit dwelling.

NCTCOG held its first virtual public meetings for the Dallas-Fort Worth High-Speed Connections Study in September. The study is evaluating high-speed transportation alternatives between Dallas, Arlington, and Fort Worth to link the center of the region.

The meetings, which were held September 23 and September 24, gave North Texans a chance to hear first-hand about the study overview and provide input to planners examining potential technologies and routes. Residents were able to comment or ask questions about anticipated stops between Dallas and Fort Worth, travel time between Dallas and Fort Worth and the development of restaurant, retail and housing options near the high-speed transportation corridor.

Public input will continue to be sought throughout the study. Phase I of the study, which will take 12 months, aims to gather public opinion and develop and evaluate both a potential technology and alignments/corridor alignments. Phase II will last 24 months and include preliminary engineering and environmental work. Another round of public meetings are slated for December 2020.

The initial public meetings were held after the Federal Railroad Administration issued a Record of Decision for Texas Central Railway’s Dallas-to-Houston high-speed rail line, allowing the project to move forward.

The technology selected for the Dallas-Fort Worth high-speed transportation corridor would ultimately connect to the high-speed rail line, allowing North Texans to travel to Houston in about 90 minutes.

Meeting materials are available in  English and Spanish at www.nctcog.org/dfw-hstcs.

Dallas-Fort Worth residents will have an opportunity to review and comment on transportation initiatives and planning efforts across the region beginning Monday, October 12.

NCTCOG staff will post a presentation on Cotton Belt Trail design, funding and planning efforts for review at www.nctcog.org/input.

The 26-mile Cotton Belt bicycle-pedestrian trail will be constructed in phases and run parallel to the Silver Line, Dallas Area Rapid Transit’s planned commuter line.
Additional funding was requested for the engineering and construction of critical portions of the bicycle-pedestrian trail, as well as sound walls near schools. The Regional Transportation Council in September approved the necessary funds.

The Silver Line will start at Dallas Fort Worth International Airport and continue northeast to Plano, providing direct rail access to one of the world’s busiest airports for residents of Grapevine, Coppell, Dallas, Carrollton, Addison, Richardson and Plano. The line will connect to Trinity Metro’s TEXRail at the airport.

The UPWP is a two-year statement of work identifying transportation and air quality planning tasks to be carried out within the 12-county the metropolitan planning area.

Finally, information on the Regional Smoking Vehicle Program and vehicle incentive opportunities will also be available.

For information and to review the presentations, visit www.nctcog.org/input. Comments will be accepted through November 10.

To request printed copies of the information, call 817-608-2365 or email cbaylor@nctcog.org.