High-speed transportation in North Texas has drawn interest from everyone from students to planners, policymakers to industry professionals. The idea of traveling between Dallas and Fort Worth in just a few minutes appeals to people in an area experiencing some of the most intense growth in the country. It would add another option to help residents get to their destinations, but may also serve as a gateway to other parts of Texas.

What the high-speed transportation will look like is expected to become clearer soon. The North Central Texas Council of Governments has released a request for proposals for firms interested in developing and evaluating technologies and alignments, as well as documenting these efforts through the NEPA process for the Dallas-Fort Worth corridor, including Arlington and Dallas Fort Worth International Airport. NCTCOG, the Federal Railroad Administration and the Federal Transit Administration will administer this study.

Hyperloop technology was demonstrated in Arlington as part of a national tour by Virgin Hyperloop One over the summer, and the company is considering the region to house a certification facility.

The selected option should enhance the regional transportation system and connect the metropolitan area with other proposed high-performance passenger systems in the State. A consultant is currently studying the feasibility of bringing high-speed transportation to the Fort Worth-to-Laredo corridor.

Firms interested in studying the Dallas-Fort Worth corridor must submit proposals to NCTCOG by 5 p.m. Friday, December 13.

Work on Dallas Area Rapid Transit’s Silver Line has begun. DART held a series of ceremonial ground-breaking events in September along the route of the 26-mile regional rail line, which will run from Plano to DFW Airport, where passengers can connect with Trinity Metro’s TEXRail.

Opening in December 2022, the $1.1 billion project will provide passenger rail connections and service that will improve mobility, accessibility and system
linkages to major employment, population and activity centers in the northern part of the DART service area. The Silver Line will traverse a total of seven cities: Grapevine, Coppell, Dallas, Carrollton, Addison, Richardson and Plano. 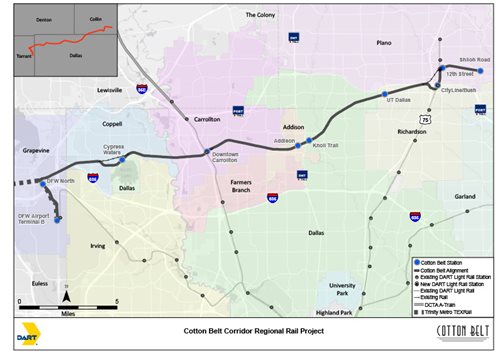 Service will include 10 stations across the alignment, providing new transit opportunities for North Texas residents and delivering greater capacity and connectivity, spurring economic development, and supporting workforce development across the region.

In addition to the TEXRail connection, DART's Silver Line will interface with three existing rail lines: The Red/Orange Lines in Richardson/Plano, the Green Line in Carrollton and the Orange Line at DFW Airport. — By Dallas Area Rapid Transit

The Texas Volkswagen Environmental Mitigation Program has opened the next round of funding for projects to replace or repower old diesel refuse vehicles.

Approximately $8.3 million in funding is available to the Dallas-Fort Worth area, including the counties of Collin, Dallas, Denton, Ellis, Hood, Johnson, Kaufman, Parker, Rockwall, Tarrant and Wise. Local governments are eligible to receive up to 80% funding for replacements and repowers. Grants will be awarded on a a first-come, first-served basis. Visit www.tceq.texas.gov/agency/trust for more information about the program and grants available.

A new law passed by the Texas Legislature has changed how public comments are treated at Regional Transportation Council meetings.

Known as House Bill 2840, the law is intended to make it easier for Texans to address government entities before any votes are taken or items are discussed. As of September 1, there is a single comment period at the beginning of each RTC meeting.

Comment cards will be provided. If members of the public wish to comment, they must submit their cards and specify which agenda items they plan to address. Then, they will be allowed to speak or simply submit their written comments. Both forms of commentary will be added to the official minutes.

Going forward, other considerations will be made such as room layout, additional personnel and technology needs in order to enforce time limits and ensure RTC meetings flow efficiently. The RTC will also have to officially adopt a new set of rules regarding public comments in the future.

There are special provisions for non-English speakers. Individuals who require interpreters will be given extra time to convey their message to the RTC.

Each day, North Texas’ regional trail system plays a major role in helping people travel to schools, jobs, retail areas, transit stops and other important destinations. To highlight the regional trail network across the Dallas-Fort Worth area, NCTCOG has begun a series of monthly videos.

The videos focus on the benefits of trails, such as transportation and regional connectivity, access to job centers, and community enhancement. They include interviews with local government leaders and staff who helped develop the trails, as well as trail users and organizations important to their maintenance and promotion. The videos are intended to be a resource for people to learn about great bicycling and walking facilities all around them.

Over the next several months, NCTCOG’s Sustainable Development Team will release — on the first Friday of each month — videos showcasing a specific trail in the region. You can view these videos by visiting www.nctcog.org/bikeweb.

Watch for new trail videos each month. In the meantime, grab your helmet and bike or walking shoes and go explore.

NCTCOG has been selected to receive funding from the Federal Highway Administration to create a plan for the build-out of electric vehicle charging and hydrogen refueling infrastructure along Interstate Highway 45. This is a critical step in the transition of this highway to a Zero-Emission Vehicle Corridor and will enable emissions-free travel, with focus on the freight sector. Last month, the RTC approved an application to FHWA for funding for the project.

This initiative is part of a longer-term, broad view of IH 45 as a strategic corridor for sustainable initiatives, which could include autonomous vehicle technologies, truck platooning and other emerging transportation elements.

NCTCOG will host a public meeting in November to provide updates on several transportation projects and initiatives, including hyperloop technology.

With transportation needs increasing throughout the region, NCTCOG is focused on several innovative projects that could increase the reliability of the system. Staff will provide a status report on one of these, hyperloop technology.

In addition, the meeting will touch on HOV transportation control measures (TCMs), which are not yielding the same emissions benefits they once were. Consequently, they could be removed from the clean air plan, known as the State Implementation Plan.

If taken out of the plan, they must be replaced by other projects that achieve equivalent emissions benefits. NCTCOG staff has identified traffic signal corridors in the nonattainment region that will serve as alternate TCM projects.

Staff will also highlight 12 shared-use trails within the Dallas-Fort Worth region through a series of videos detailing their benefits, including economic development, regional connectivity and improved quality of life.

Information on the Regional Smoking Vehicle Program and Know Before You Fly Your Drone workshops will be highlighted.