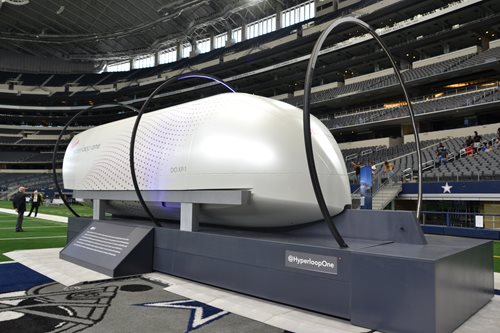 Virgin Hyperloop One is searching for a home for a facility to serve as a certification center for its groundbreaking technology — and North Texas is interested. The company released a request for proposals in November asking for regions with a desire to welcome a facility.

Conceptual proposals are due to Virgin Hyperloop One by December 13. The North Central Texas Council of Governments is looking for ways to integrate high-speed transportation into the current transportation system to improve mobility as the region continues growing. Hyperloop and high-speed rail are two possibilities for moving people through Dallas-Fort Worth and throughout Texas. Texas Central Partners is working to bring high-speed rail to the Dallas-to-Houston Corridor.

A separate effort is underway to connect the rest of the region to high-speed rail. In October, NCTCOG released an RFP seeking a consultant to study high-speed options in the Dallas-Fort Worth corridor, including Arlington, Dallas and Fort Worth. Firms interested in the project face a December 13 deadline. A study of the Fort Worth-to-Laredo corridor is also being conducted, with a final report due in early 2020.

The North Central Texas Council of Governments invites the public to review and provide comments online on a new way to receive peak-period managed lane discounts, the hyperloop certification center initiative and more transportation-related projects.
Information will be posted at www.nctcog.org/input for public review and comment December 9, 2019-January 7, 2020.

Ozone season in North Texas concluded November 30, with the region continuing to pursue the federal government’s standards for clean air. The nonattainment area’s ozone concentration is 77 parts per billion, up slightly over last year’s 76 ppb, but still historically low. 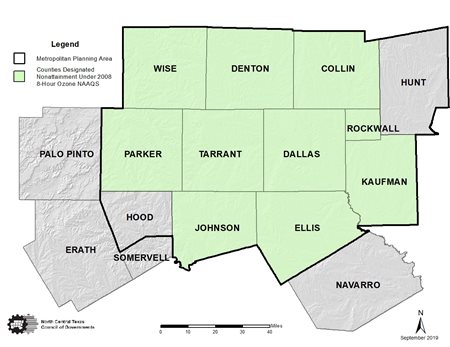 Ten counties — Collin, Dallas, Denton, Ellis, Johnson, Kaufman, Parker, Rockwall, Tarrant and Wise — are in nonattainment for the 2008 standard. Nine counties are working to comply with the 2015 standard. Rockwall is not included. In planning for the present and future transportation needs in North Texas, it is important to make sure health is not negatively impacted.

Dallas-Fort Worth has made significant progress to improve its air quality since 1998, when the design value was 102. The design value has steadily declined over the past two decades due to improvements in fuel efficiency and the efforts of NCTCOG and its partners to encourage clean air choices.

NCTCOG is continuing its trail of the month focus in December, highlighting the Preston Ridge Trail, a 14.5-mile, north-south concrete facility that begins near Coit Road and Haymeadow Drive in Dallas, traversing northward up to Ridgeview Drive in Plano. A segment approximately a mile long is funded and will connect both the Dallas and Plano sections in the future.
NCTCOG is highlighting 12 bicycle-pedestrian trails as part of a monthly series that began this summer. The videos are being released on the first Friday of each month and are intended to help residents learn more about the many great trail systems in the Dallas-Fort Worth area.
Look for the release of the Preston Ridge Trail video December 6 and watch all the videos at www.nctcog.org/bikeweb.

The Old Town Lewisville commuter rail station has been renamed for Charles Emery, the longtime Denton County Transportation Authority chair who was instrumental in the agency’s development.

It officially became the Charles Emery Old Town Station on October 29.
While serving as chair of the DCTA board for 18 years, Emery was heavily involved in the growth of the agency, including the expansion of DCTA’s footprint to include a commuter rail.

In 2011, the 21-mile A-train opened, connecting Denton County to the Dallas Area Rapid Transit Green Line in Carrollton. The A-train has stations in Denton, Highland Village and Lewisville in addition to connecting with DART in north Carrollton.

In addition to his almost two-decade run as DCTA chair, Emery was a member of the Regional Transportation Council for 15 years.

In 2002, 73% of the county’s voters approved the creation of DCTA. The following year, a half-cent sales tax was passed by Denton, Highland Village and Lewisville voters.

Entities with renewable energy efficiency projects are strongly encouraged to apply for funding through this new program. These can include the installation of rooftop solar water and space heating systems, geothermal heat pumps, and small wind and solar-thermal systems.

The deadline for submitting applications is August 31, 2020. For more information, visit
https://comptroller.texas.gov/programs/seco/funding/110521/

NCTCOG has reopened the Clean Fleets North Texas 2019 Call for Projects with approximately $700,000 available in grant funding. The deadline to apply for funding is February 14, 2020.

Funding levels are as follows:

45% for electric vehicles and equipment
35% for vehicles/equipment powered by an engine that meets the California Air Resource Board’s optional low-NOx standards
25% for all others
Visit www.nctcog.org/aqfunding for more information on this funding opportunity.

The recent growth in this evolving field has brought these devices, also known as drones, to the masses, and safe operation for all those involved quickly became a top priority.

From professional operators to those who see drones flying near their home, it is becoming imperative that all North Texans be aware of the rules and regulations, best practices, and where to fly these devices.

NCTCOG is hosting the first of a series of drone workshops at 10 am January 18 at its Arlington offices, 616 Six Flags Drive.

Over the next two years, 12 free drone workshops will be held in a variety of locations across North Texas. For information on locations, times and dates, visit www.northtexasuas.com.

Attendees will learn the rules and regulations how to register their drones, and tips on operation, including pre-flight planning and conducting a safe flight.

NCTCOG has been working with partners on issues related to this evolving technology. The workshops are currently being sponsored by various UAS industry stakeholders. The workshops are also being supported by the North Texas UAS Safety and Integration Task Force.

The taskforce was organized to serve as an information “clearinghouse” for academia, public- and private-sector entities and the general public.

To address integration issues and carry out solutions, the task force has formed working groups focused on education and public awareness, legislation, training and integration.