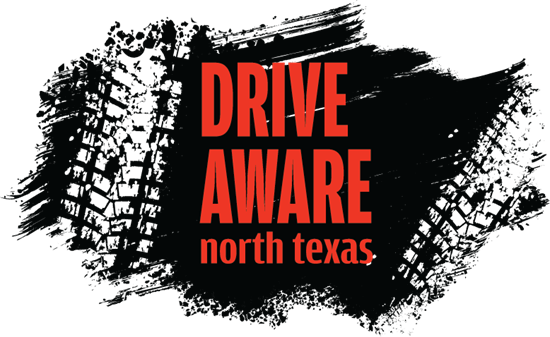 The North Central Texas Council of Governments has launched an educational campaign aimed at improving negative driver behaviors that are the leading contributing factors for serious-injury and fatality crashes in North Texas.

Drive Aware North Texas encourages motorists to avoid risky behaviors while behind the wheel. The educational campaign focuses on four main causes of serious and fatal traffic incidents: speeding, impaired driving, distracted driving and wrong-way driving. It examines data over the past five years in categories including, crashes by time of day and gender.

Speeding was the top contributor to serious-injury and fatality crashes on North Texas roadways in 2020, figuring into one-third of incidents across the region. The next three categories – impaired driving, wrong-way driving and distracted driving – accounted for a combined 31% of serious and fatality crashes.

Driver impairment – by alcohol, illegal drugs, legal medication or drowsiness – has remained a leading contributing factor in serious roadway crashes in both Texas and the region, although, the number of crashes involving impaired driving has decreased from 2016-2020.

Wrong-way driving incidents – though less frequent – are more likely to result in serious injuries or fatalities. NCTCOG continues to work with its transportation partners to implement the NCTCOG Wrong-Way Driving Mitigation Program to implement countermeasures at known hotspots. 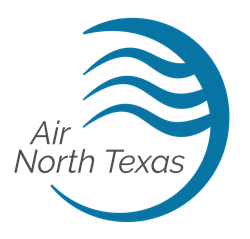 The City of Cedar Hill has been recognized as this year’s Air North Texas Partner of the Year for its comprehensive work to improve the region’s air quality. Cedar Hill was among four Dallas-Fort Worth area cities to earn awards from Air North Texas for their commitment to improving air quality throughout the growing region. The awards
recognize partners’ efforts throughout the 2021 ozone season.

The City of Plano received the award for outstanding outreach, focusing its efforts on the use of digital strategies that helped engage residents and businesses.

The City of Grand Prairie received the award for outstanding advertising, as well as the Arlo Ambassador Award, named after campaign mascot Arlo the Airmadillo.

A series of renewable energy and community outreach events helped the City of Dallas earn the award for the outstanding initiative. 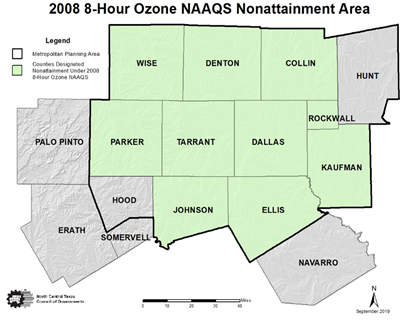 Another North Texas ozone season concluded November 30, and the region continues to pursue attainment of federal air quality standards. For the second year in a row, the Dallas-Fort Worth area’s design value is 76 parts per billion, a notch above the federal government’s 2008 standard of 75 ppb. The region is also still trying to reach the stricter 2015 standard of 70 ppb.

While Dallas-Fort Worth remains outside of these standards, air quality has improved substantially over the past two decades. In 2001, the design value was over 100 ppb. Since then, significant transportation system improvements, funding initiatives and educational efforts have helped the region move closer to attainment.

After tentatively missing the deadlines to meet the standards, the region faces potential reclassification. For the 2008 standard, the region would go from serious to severe, and for the 2015 standard, it would move from marginal to moderate. NCTCOG will continue to work with public- and private-sector partners on efforts that will help the region meet the existing standards and position itself for future success. Residents can be part of the solution, as well.

Here are a few steps they can take to improve regional air quality:

To learn more about how the public can help reach the ozone standards, visit www.airnorthtexas.org. 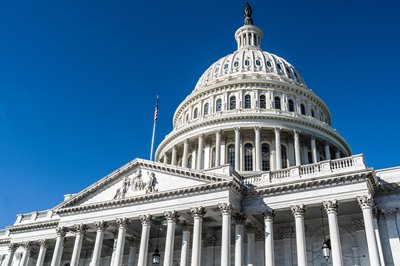 President Joe Biden in November signed the $1 trillion Infrastructure Investment and Jobs Act, which will provide funding for the nation’s roadways and transit system over the next five years. Texas is expected to get approximately $27 billion for highways and $3.3 billion for public transit through fiscal year 2026.

The new law also reauthorizes the federal highway program for another five years. The legislation is expected to address  other top priorities of the  Biden administration, including  expanded access to  clean drinking water and high-speed Internet.

A few highlights:
· $91 billion to modernize transit systems, along with reauthorization of existing transit programs for five years
· $66 billion in additional rail funding to eliminate the Amtrak maintenance backlog, modernize the Northeast Corridor, and bring world-class rail service to other parts of the country
· $7.5 billion to build out a network of electric vehicle chargers across the nation
· $25 billion to address repair and maintenance issues, reduce congestion and drive electrification and other low-carbon alternatives at the nation’s airports 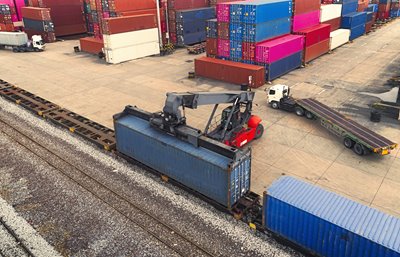 The $12.8 million project includes the purchasing of eight electric shuttles to deliver on-demand transit, construction of sidewalks and crosswalks near the VA Medical Center and Dallas Area Rapid Transit light-rail station and more than 40 new traffic signals to optimize transit, pedestrian and vehicular movements. The inland port was one of four Texas projects awarded a total of $22 million in RAISE grant funding by the Biden administration.

The Regional Transportation Council recently approved approximately $200,000 for implementation of three projects as part of the Blue-Green-Grey sustainable infrastructure program.

The City of Allen Inlet Floatables Filter project will receive $75,000 and will create a less-expensive, more-effective way to collect floatable litter in stormwater.

The RTC also approved $74,910 for the City of Dallas Bottom District Neighborhood Beautification project, which aims to establish a green infrastructure network in a historically underserved neighborhood located in a floodplain.

The third project receiving assistance from the RTC is the University of Texas at Arlington Laboratory Testing of Engineered Media for Biofiltration Swales Project, which will receive approximately $50,000. The purpose is to test an engineered filtration system as a possible inexpensive and easier-to-maintain solution than standard bioswales for addressing stormwater pollution.

The Blue-Green-Grey program seeks to support innovative pilot projects that incorporate water, environmental, and transportation components and provide resources for cities and organizations to replicate these ideas throughout the Dallas-Fort Worth area. These projects were approved as part of the program’s third round of funding. For more information on NCTCOG’s green infrastructure efforts, visit www.nctcog.org/greeninfrastructure. 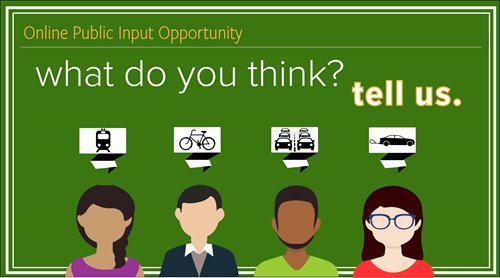 Dallas-Fort Worth residents are invited to review and comment on several transportation planning initiatives beginning December 13, as part of an online input opportunity presented by the NCTCOG Transportation Department.

NCTCOG will provide details on the Regional Air Quality and Management and Operations Program, which provides federal and regional funds to programs and projects that address the region’s air quality and aid in the management and operations of the regional transportation system.

Final project recommendations for the Incident Management Freeway Blocking Equipment 2021 Call for Projects will also be presented for review and comment. This CFP made $1 million available for the purchase of equipment to provide protection to first responders.

Proposed modifications to the list of funded projects through 2024 maintained in the Transportation Improvement Program (TIP) and Unified Planning Work Program (UPWP), will be posted for review and comment.

A recording of the presentations will be posted at the following: www.nctcog.org/input, Comments are welcome through January 11.

To request printed copies of the information discussed, contact Carli Baylor at 817-608-2365, or CBaylor@nctcog.org