With careful planning and coordination with regional, State and federal partners, the Regional Transportation Council and North Central Texas Council of Governments staff are meeting the transportation challenges posed by extensive growth. One challenge is providing reliable commutes, helping employees get to work in the morning and home in the evening.

Typically, growing metropolitan areas across the country experience significantly more congestion as their population increases and more cars hit the roads. However, that does not appear to be holding true for Dallas-Fort Worth in recent years. In fact, according to one measure of congestion, mobility is getting better. The region’s congestion rating moved from seventh-highest in the country to 10th in 2017, with drivers spending 54 hours in congestion, according to the Inrix Global Scorecard.

Inrix attributed the improvement to projects such as 35Express and the Horseshoe project in downtown Dallas. These projects represent just a snapshot of the congestion-reducing activity in Dallas-Fort Worth. Since 2000, the region has spent approximately $28 billion on construction of transportation projects.

TomTom, another company that uses data to measure traffic congestion, presents a slightly different picture of mobility, rating DFW No. 34 nationally over a three-year period ending in 2016, the most recent year for which data is available. In Dallas-Fort Worth, motorists are on the roads 18 percent longer because of congestion. By comparison, Seattle traffic adds 34 percent more travel time and Washington, DC, 29 percent. Using funding mechanisms provided by the Texas Legislature, the RTC will continue to coordinate with its local partners and the Texas Transportation Commission to advance projects that keep people moving reliably. And when additional tools become available, the RTC will be ready to put them to good use. 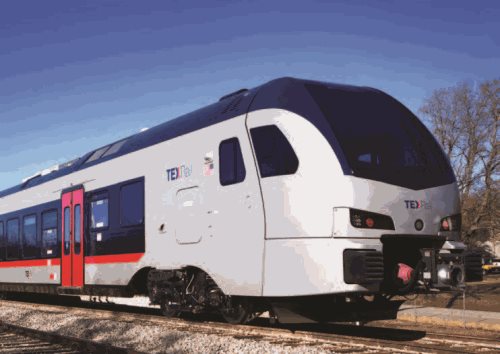 Transit options in Dallas-Fort Worth are expanding, with the debut of a long-awaited rail line in the west and plans underway to bring commuter rail from Dallas Fort Worth International Airport to Plano.

TEXRail welcomed its first passengers January 10. The rail line, operated by Trinity Metro, runs from downtown Fort Worth to DFW Airport. TEXRail offered free rides through the end of January.
Through January 28, nearly 83,000 people had ridden the commuter line, according to Trinity Metro.

Dallas Area Rapid Transit is working on implementing service along the eastern portion of the Cotton Belt Corridor, which would serve passengers in Dallas’ northern suburbs who would like to take the train to the airport.
DART has operated light rail service from Irving to DFW Airport since 2014. The addition of the Cotton Belt commuter service will be aided by a $908 million federal loan announced in December. The line will connect with DART’s Red, Green and Orange lines, as well as the A-Train, operated by the Denton County Transportation Authority.


The Regional Transportation Council approved a funding request for up to $500,000 in January that will allow Trinity Metro to continue enhanced connectivity between the AllianceTexas area and potential employee pools in Fort Worth, Denton and surrounding areas. The money comes from Regional Toll Revenue funds previously approved for transit.

This service was implemented in 2018, by Toyota after the automaker relocated its North American headquarters to Plano. The pilot project was intended to increase public transit ridership and transportation access in the Alliance area. The RTC’s funding will allow the service to continue for two additional years. It was scheduled to conclude January 31, 2019.

The project demonstrated the importance of connecting employees with existing nearby bus routes and final destinations. As the Alliance area continues to grow, transportation will be a crucial component for lasting success.
Trinity Metro is coordinating the service with DCTA and plans to integrate the Alliance Link into the High-Intensity Bus project, or guaranteed transit, taking shape along the Interstate Highway 35W corridor that has been funded by the RTC.

Drive.ai, the company that has introduced autonomous vehicles to the Dallas-Fort Worth area, has expanded options in Arlington for people who want to experience what it is like to ride in driverless vehicles.
The City of Arlington, in partnership with Drive.ai, has expanded its automated vehicle pilot program to include a weekday service between NCTCOG’s Centerpoint Two building, 616 Six Flags Drive, and Texas Live!, located in the City’s Entertainment District. Although the new stop is located at NCTCOG’s offices, anyone who chooses may hop aboard the orange van at the new stop.

The purpose of this new route is twofold:
1. Increase the amount of service that Drive.ai provides during the pilot program
2. Generate rider feedback to improve Drive.ai’s service performance

Each vehicle has a safety driver in place to answer any questions during the ride. The new service launched in December and runs from 11 am to 4 pm weekdays.
To access the Drive.ai service, simply visit the kiosk in the Centerpoint Two lobby and order your ride.

The Dallas-Fort Worth Clean Cities Coalition works with local fleets to promote practices and decisions to reduce petroleum consumption, which saves money and improves air quality. In 2017, DFW Clean Cities was able to reduce more than 23 million gallons of petroleum across 32 fleets using nearly 7,000 vehicles.

This data is compiled in the Clean Cities Annual Report, and provided by local fleets through their annual survey submissions. The annual survey allows DFW Clean Cities to help track regional progress through the participation of fleets in the area that do their part to reduce their fuel consumption and emissions.

Submitting an annual survey not only demonstrates a fleet’s commitment to cleaner air, but also makes it eligible for the coalition’s Fleet Recognition Awards. The surveys are due February 15. Learn more and find our annual survey at www.DFWCleanCities.org/annualreport.


NCTCOG is working to help cities, counties and other public-sector entities comply with a new energy conservation law.

They must also reduce electricity consumption by at least 5 percent per year until 2021, according to the law.

To assist these entities, NCTCOG is requesting feedback via an online survey to develop regionwide energy efficiency workshops and resources as part of a Regional Energy Manager Project.


NCTCOG will host a public meeting in February to provide updates on several transportation projects and initiatives, including regional transit planning, Volkswagen Settlement funding and revised complaint procedures for the Title VI Program.

With transit needs increasing in DFW, NCTCOG is focused on several projects throughout the region and beyond. Staff will provide an update on high-speed rail service from Dallas to Fort Worth and Fort Worth to Laredo, as well as the advancement of first- and last-mile connections to rail systems.

Additionally, staff will present an update on the highly anticipated Beneficiary Mitigation Plan for Texas under the Volkswagen Environmental Mitigation Trust and summarize 2019 air quality funding opportunities.
In 2016, courts determined that Volkswagen violated the Clean Air Act by deliberately selling diesel vehicles equipped with technologies that tricked emissions testing. A settlement resulted, with approximately $209 million set aside for Texas. Dallas-Fort Worth’s share will be $33 million.

The meeting will also include a review of revised complaint procedures under the Title VI Program, which documents how NCTCOG considers civil rights in all phases of planning.

Members of the public can provide feedback on these updated procedures during the 45-day comment period, which runs February 11 through March 28.

Information on electric vehicle incentives, AirCheckTexas, the 511DFW Traveler Information System and Mobility Plan administrative revisions will be highlighted. To watch the meeting online, click the “live” tab at www.nctcog.org/video. A recording of the presentations will also be posted at www.nctcog.org/input.